Still don't have a picture on the 'puter so you can actually see her, but meh.
The dog has had two unplanned off  leash adventures in two different states.  Once last week she escaped from her choke chain my ducking out of it as I tried to move it higher on her neck.  She ran around the neighborhood for about a half hour until I caught her.  She's fast, like a gazelle.
The second time was around my parent's neighborhood in the 'Boro as I was getting ready to head back to Indy.  I was in the kitchen gathering last minute things when I heard the glass storm door slam, I thought she didn't make it out, but she did.  Gone fast.  I sent Chief after her, thinking she would stop to play with him and he would run her back, but he was about useless with his pudgy self.  I then got in the car with Chief thinking I would find her.  After 10 minutes of that, I was about to give up, but set out on foot with Chief.  Luckily most of the yards there are fenced, so there's no hiding in backyards.  I found her a couple streets over barking at another dog.  I called her, she came, and ran right past Chief and I.  I couple coming out of their garage caught her in their garage for me.
I'm thinking this escaping may be the reason for her ending up the shelter? Though she was an owner surrender...I don't know.  She's too sweet to just give to a shelter.
Rambling by Starbuck at 9:29 PM No comments:

So we got a dog.  Her name is Starbuck and she's a rescue from the Indianapolis Humane Society.  That's where I got Bagpipes the cat. Starbuck is mostly yellow lab with either greyhound, shepherd, collie or a mix of those.  She's super cute and super mellow.  She reminds me of Yellow Dog from the movoe Funny Farm.
The cats don't like her as to be expected.  She's fine with them until they walk or run away then she wants to chase and play.  The cat's world has been turned upside down.  I'll post a picture when i get around to it.
Rambling by Starbuck at 9:46 AM No comments: 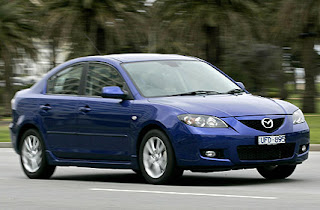 I got a new car today.  I got a 2009 Mazda3 in 'Stormy Blue Mica.' Silly name, cool color. It's pretty sweet.  It even has a 5 speed manual, a sunroof and a 6 CD changer.  This obviously isn't a picture of mine, I'll get one when it isn't dark outside.
In other news, my school is wiping all the staff again.  Good news I still have a job next year.  Good news, I could be at another school.  See how I said there's no bad news.
Also check this out.  My cat does both these things to me every day.  Maybe I should start sleeping with one eye open....
Rambling by Starbuck at 9:28 PM 1 comment:

So it's been a few months.
I'm sitting here at home recovering from getting a wisdom tooth wrenched out.  I'm not exaggerating.  To quote the dentist.
"I've only seen one other tooth this high up, and it was in the operating room.  I felt like I was digging in your ear canal"
Turns out the tooth was also attached to my jaw bone.  So they had to cut at some of that.
All while I was wide awake with nothing but the numbing shot.
I was only going to take one day off of school, but I ended up taking 2.  Not because of the incision, yeah that hurts, but my jaw joint hurts the most.  Rightly so, after being open for 2.5 hours.  There was some cavity redoing involved, then the wisdom tooth.  The tooth itself took 45 mintues.
All in all, I would kill to eat food I can chew.  But or now, it's mashed potatoes, jello, and pudding.
Rambling by Starbuck at 2:22 PM No comments:

Not a joke.
Rambling by Starbuck at 11:13 AM No comments:

Someone find me a new job.  Mine sucks.
Rambling by Starbuck at 4:11 PM No comments:

You know it's winter when....
The cornfield behind you house gets mowed? (is that the right word) down.
Rambling by Starbuck at 5:30 PM No comments:
Older Posts Home
Subscribe to: Posts (Atom)